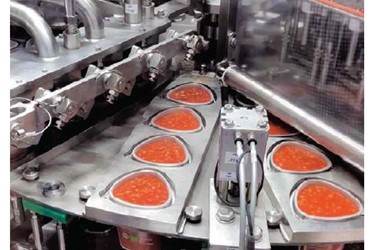 The delicious new tomato sauces, from the start-up Tomamore, are already on the refrigerated shelves of southern Germany. WALDNER Process Systems managed the gentle cooking of the fresh produce, while the WALDNER DOSOMAT completed the packaging of the unusual containers, which created an all-around successful collaboration.

WALDNER Makes the Cooking Process and Packaging Possible
Tomamore GmbH is a start-up making inroads into the hotly contested ready meals market, scoring with its fresh ingredients and organic quality. Walter Stauß, Managing Director of the Ravensburg based company, relies on the processing of fresh goods and an industrial process, which comes very close to the way “Grandma prepared it in Sicily”.

From DOSOMAT to Process Systems

The initial contact by Tomamore to Hermann WALDNER GmbH & Co. KG came through an inquiry about packaging with a DOSOMAT. However, it quickly became clear that WALDNER Process Systems might also be considered for the challenging production of the sauces. After many discussions, both divisions of WALDNER were awarded the order. Christian Heinzelmann, Packaging Technology / Design at WALDNER DOSOMAT reported, "We were awarded the order due to the fact that we maintain control of the specially shaped containers from the filling line through to the end of line packaging process, thereby ensuring a secure and efficient process workflow. Our proximity to the factory for support, service, and good straightforward communication were other factors important to Mr. Stauß. There was often a call and 3 hours later we were sitting down together and discussing the project on site.”

In-depth engineering knowledge and commitment convinced the Managing Director about Process Systems as well: “There are no longer many manufacturers of batch cooking systems, and there are major quality differences between them. I quickly realized that there was a lot of “hot air” with the other providers. When I consider all the challenges we had to overcome to handle unforeseen problems and coordinate process workflows, the system would still be standing idle today. With WALDNER I immediately noticed that I was speaking to professionals, and that also turned out to be the case,” confirms Walter Stauß.