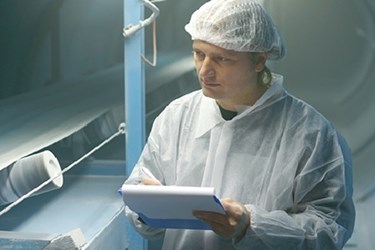 From metal and plastic to bone fragments and beaks, particle contamination in food can be a major headache for companies and consumers alike

As more food is globally sourced, food contamination is quickly becoming a worldwide issue. In a recent report from the Food Safety Authority of Ireland (FSAI), food-related queries and complaints rose a staggering 12.5 percent in 2013. The FSAI states, “The increased activity reflects a growing awareness among consumers of the need to report poor hygiene practice and an increase in demand among food businesses for information about labeling requirements and resources for food business start-ups.”

Foreign objects in food were one of the major areas of complaints, with items such as screws, glass, fingernails, and even a chicken’s head having been found by consumers. Edel Smyth, FSAI information director, says, “Consumers are increasingly vigilant and aware of the need to report bad practice or experiences they’ve had where food safety has been compromised,” says Smyth. “Consumers are entitled to the highest standard of food safety and hygiene in every food establishment and across every food product they purchase. It is the responsibility of food businesses across the country to ensure that they provide food which does not compromise the health of anyone who eats it.”

Ireland is far from the only country experiencing issues with food contamination. As shown in this case study, Kraft Foods Deutschland (Germany) is constantly checking for metal particulates in its powder ingredients. With all of the moving metal parts in food production, metal shavings, screws, and other pieces are a constant threat to enter the food supply. The Food Safety and Standards Authority of India (FSSAI) is preparing to install a product recall procedure due to the recent spike in contamination and adulteration of food produced for export. India’s new law, when fully implemented, will allow for the recall of entire batch runs or specific lots throughout the entire supply chain. Several of India's food manufacturers are beginning to implement the use of holograms to help eliminate counterfeit products that may contain contaminants. This technology has been around for a while, but with the recent spike in counterfeiting, it may be time for more manufacturers to considering using packaging markings, such as holograms, color-changing inks, and other sensitive materials.

The U.S. is not immune to this issue by any means. This past October, Turkey Hill Ice Cream performed a voluntary recall due to metal contamination in its products. Specifically, metal shavings from processing equipment were found in three of its signature products. However, this company is not alone, which is why food manufacturers are turning to metal detectors, x-ray machines, and other solutions to eliminate particulate contamination.

As the food system becomes more global, countries are going to have to work together to implement and become compliant with regulations such as the Food Safety Modernization Act (FSMA) and Produce Traceability Initiative (PTI) to ensure product safety and avoid costly product recalls. Many countries, such as India, are beginning to rely on GS1, a neutral, international nonprofit, to aid in the creation of guidelines for food safety. A global standard will go a long way to help ensure the quality of food imported and exported throughout the world.