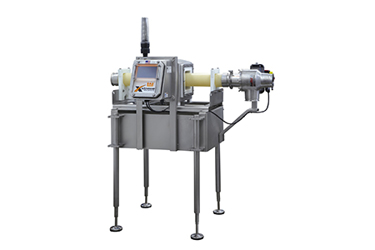 Today’s consumers are demanding safer, healthier foods. That demand moves down the chain with retailers and food service providers asking manufacturers to provide verifiable proof those food safety systems have been effectively implemented.

Drew’s LLC, which began operations in 1995, has taken this nationwide initiative to a high level with operational procedures and technologically innovative equipment specifically installed to meet rigid food safety guidelines.

To remain competitive in the demanding and highly-scrutinized food industry, Drew’s achieved certification from the Safe Quality Food Institute in meeting the SQF 2000 Code of Food Safety. This accomplishment was the culmination of employee training and facility improvements that took place at the company’s Chester, Vermont processing and distribution center.

According to Chief Operating Officer John Cummings, certification was earned in part because the company installed an Eriez® Xtreme® Liquid Line Metal Detector to detect metal contamination in its all-natural dressings and salsas prior to being bottled. Drew’s previously installed an aperture style Xtreme Metal Detector at the end of its production line to inspect the capped bottles prior to being packaged in cartons and shipped to hundreds of stores. With the two Eriez Metal Detectors in place, Drew’s has double protection against any sort of metal particulate reaching customers.