Ben & Jerry's Homemade Inc. has signed on with the big boys, inking a buyout deal with $45 billion Anglo-Dutch global giant Unilever NV, and both concerns are pledging the new arrangement won't compromise the social mission of Vermont's Finest.

B & J's board of directors gave the nod to Unilever's $43.60 per share offer for the company's 8.4 million outstanding shares, putting the transaction's value at $326 million, company officials announced today.

The arrangement calls for B & J to operate separately from Unilever's current U.S. ice cream business, with an independent board of directors focusing on "providing leadership for Ben & Jerry's social mission and brand integrity," company leaders said.

Overseas opportunities
Although he's unsure what the deal will do for B & J's domestic plight, Kantner said the deal is big doings for the South Burlington, VT-based company's overseas prospects.

With various operations in 88 nations, Unilever touts itself as the world's largest ice cream company and owns such brands as Breyers All Natural, Good-Humor, Popsicle, Klondike and Wall's. The Wall's brand has been at the center of a United Kingdom monopoly controversy that prompted the British government to pass new rules, effective April 15, governing the nation's ice cream market. 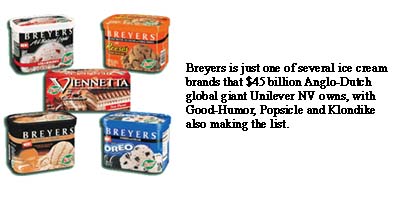 The Unilever offer probably edged out other deals B & J leaders were considering because of the international possibilities, Kanter said.

"Unilever believes the superpremium segment of the ice cream market will continue to grow and that the Ben & Jerry's brand will lead that growth," said Richard Goldstein, president, Unilever Foods North America. "Furthermore, we feel that Ben & Jerry's has a significant opportunity outside of the United States.

"Unilever is in an ideal position to bring the Ben & Jerry's brand, values and socially responsible message to consumers worldwide," he said. "These opportunities strongly support Unilever's stated strategy for expanding the ice cream category globally."

Stateside, it might prove a different story, though. B & J has been up against the ropes with Oakland, CA-based Dreyer's Grand Ice Cream Inc. taking body shots at the company via the debut last September of its Dreamery pint-sized superpremium ice cream line.

B & J's decision to alter its distribution agreement with Dreyer's also plays a role in the company's pummeling. Under a revised agreement effective last September, Dreyer's went from distributing 70% of the Vermont company's products to only 20%, experts say, with Haagen-Dazs picking up the slack.

In 1998, Dreyer's filed suit against B & J to enforce its pact after the socially conscious concern said it was altering the agreement to give Haagen-Dazs and others a bigger distribution interest. B & J's move was largely viewed as a strike back at Dreyer's for an earlier attempted takeover.

Activism intact
Throughout the various buyout negotiations reportedly occurring since December, protecting B & J's corporate culture and socially activist philosophy has been cited as a factor in choosing a potential ally.

That policy, which includes donating 7.5% of its pretax profits to charitable causes, remains intact with the Unilever deal, both companies say.

"That we would remain autonomous, a guarantee of no employee changes and our social mission remains intact" were what made Unilever's offer so attractive, Ben & Jerry's spokesman Lee Holden told Dairy Network.com.

Unilever is slated to provide a $5 million one-time grant to the Ben & Jerry's Foundation, which earmarks funds toward community-oriented projects. "So the foundation will not only continue, it will thrive," Holden said.

The international corporation also has pledged to annually provide $1.1 million or 7.5% of its pre-tax profits, whichever is higher, to the cause. In addition, Unilever will provide $5 million in B & J's social venture fund, allowing the investment of seed capital in small minority or disadvantaged businesses.

"Ben and Jerry will be meeting with high-level Unilever executives and visiting locations around the world to teach them about our social mission and philosophy," Holden explained. 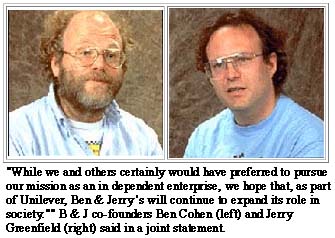 "Neither of us could have anticipated, 20 years ago, that a major multinational would some day sign on, enthusiastically, to pursue and expand the social mission that continues to be an essential part of Ben & Jerry's and a driving force behind our many successes," the two said. "But today, Unilever has done just that.

"While we and others certainly would have preferred to pursue our mission as an independent enterprise," they said, "we hope that, as part of Unilever, Ben & Jerry's will continue to expand its role in society."

To guarantee the social mission is unhampered, two members of the B & J board of directors have been empowered to sue Unilever at the multinational corporation's own expense if the agreement is violated, Holden said.

"Much of the success of the Ben & Jerry's brand is based on its connections to basic human values," Unilever's Goldstein said, "and it is our hope and expectation that Ben & Jerry's continues to engage in these critical, global economic and social missions."

B & J will remain Vermont-based, with CEO Perry Odak leading the management team during the transition, expected to start next week. The current board roster will be upped from eight to 11 members, Holden said, with two seats occupied by a self-described "socially responsible" investors group called Meadowbrook Lane Capital and another seat taken by Unilever.

"The board is still dominated by Ben & Jerry's, including Ben and Jerry," Kanter remarked.

"Really, the only change that's happening to Ben & Jerry's is that instead of thousands of shareholders, we now have one shareholder," Holden said. "For a small company, such as ours, partnering with a corporation the size of Unilever, to be able to retain our personality and values is a pretty unique situation."

The last several weeks have proven intriguing for company leaders as several deals purportedly were on the table. Just last Friday, Dreyer's reportedly upped its previous per share purchase offer from $31 to roughly $35 to $38, which would have placed a value of $250 million to $270 million on B & J.

The overture came on the heels of a reported deal in which B & J would go private via a $38 per share pact. The deal was described as giving company co-founder Ben Cohen 36% control over the corporation, with Meadowbrook Lane Capital gaining roughly the same control percentage, and the remainder picked up Unilever.