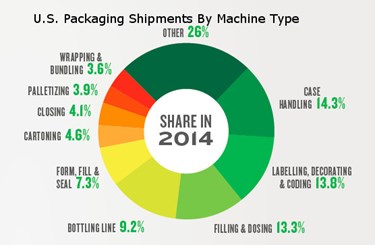 The  U.S. market for packaging equipment is expected to remain flat, or show a slight growth of about 1.6 percent for the  remainder of 2015 and upcoming 2016, according to the State of the Industry U.S. Packaging Machinery Report from PMMI, the Association for Packaging and Processing Technologies.

That report shows that the U.S. packaging machinery market grew at a brisk 4.2 percent from 2013 to 2014, coming in at $9.41 billion. In that same period, the report also notes a 4.4 percent increase in domestic shipments and growth of 3.6 percent in imports.

“This year’s report also addresses the impacts of outside factors, from legislation to retailers to population growth, on the packaging machinery market,” says Jorge Izquierdo, VP of market development at PMMI. For instance, he points to a 6.4 percent decrease in back orders as one sign that equipment sales are dampening, explaining that manufacturers don’t have as much work in progress at  this  point.

U.S. Population Growth Slowing
The U.S. packaging equipment market is not saturated, but it is mature, Izquierdo says. U.S. population growth is not as great as in some developing countries. Also, income growth is not changing as much here as it is in other countries where the middle classes are growing rapidly, and consumers are seeing greater increases in disposable income.

Increasingly, companies in developed countries such as the U.S., are relying on packaging innovation to get into the market, maintain their market, and even grow market share rely on packaging innovation. They also rely on automation to help control packaging costs. Productivity is a big part of automation, he says, but so is reducing  labor costs and contamination through human interaction.

Izquierdo says PMMI is seeing more equipment manufacturers investing in human-machine interfaces (HMI). Another reason for automation is because it is becoming more difficult to get the right staffing — both operators and technicians — for today’s equipment. End users are looking for equipment that can make the training of operators easier. New HMI systems are helping operators diagnose and solve a problem on the equipment. “They may not have robust training, but the equipment and software can help optimize the line performance,” he says.

Food and beverage continue to be the dominant segments in orders for new packaging equipment, totaling about 60 percent of the U.S. market. However, equipment for pharmaceuticals is expected to be the fastest-growing segment, which is forecast to grow at a compound annual growth rate (CAGR) of 2.7 percent to 2019.

Niches Drive Leading Segments
As for equipment types, labeling and coding is expected to be the fastest-growing segment on a percentage basis, followed by form, fill & seal machinery. This reflects the growth in certain packaging market segments. Izquierdo cites new legislation covering pharmaceutical safety and, possibly, food and beverage safety spurring the growth in coding and serialization. These developments are expected to improve product tracking and speed any necessary recalls due to contamination or other factors.

Safety legislation might be in different stages in different states, he says, but now it hopefully is being unified at the federal level. However, many U.S. food manufacturers have concerns about protecting the value of their own brands and are not necessarily waiting for legislation to move forward. They are increasingly installing coding and serialization system, while trying to stay aligned with potential legislation.

The steady growth of flexible packaging provides the basis for growth in form, fill & seal equipment sales. “Flexible packaging is the material of choice worldwide, and in the U.S. it is the segment with the most growth,” Izquierdo says.

One area of concern cited in the report is machinery exports. U.S packaging equipment shipments overseas are expected to dip, while imports will grow. Izquierdo says imports have increased slightly in 2015, but PMMI expects them to increase more significantly in 2016. This equipment is coming primarily from Germany and Italy. He says the increases in equipment imports are mainly linked to exchange rates, not any technology advantage.

Likewise, U.S. equipment exports are expected to remain flat. Latin America represents a market with high potential for U.S. manufacturers. “More than anything, U.S. OEMs need to make sure they have a continuing and consistent presence in the Latin American market,” Izquierdo says. They need to have a presence visiting end users, exhibiting at trade shows, and supporting their agents in local markets. Many European suppliers have established a presence in Latin America for a longer time. In Asia, he says, most of the market belongs to Asian manufacturers, primarily Chinese and Korean suppliers.