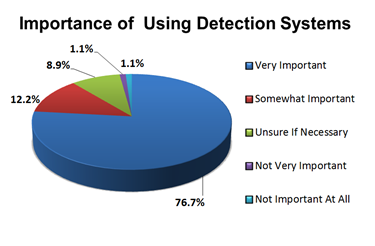 When it comes to product safety, food manufacturers place a high level of importance on the use of X-Ray and metal detection systems in their operations, according to a recent Food Online survey. Results show that 76.7 percent of survey respondents say these systems are “very important” to the success of their processing and packaging operations.

The survey was conducted in early July and drew responses from nearly 100 food and beverage manufacturers.

*This study was underwritten by Mekitec, a manufacturer of X-Ray detection systems.

Overwhelmingly, respondents express concern about what could happen if contaminants are found within their food products. They want to identify any issues before foreign materials can be discovered by consumers, preventing costly recalls that can damage their brand’s integrity.

Another big driver for the use of detection systems is the looming implementation of new FSMA regulations. Signed into law in 2011, FSMA represents the most comprehensive change to food safety regulation since the 1930s. The impetus for the law stems from a number of high-profile outbreaks of foodborne illness over the previous decade, with the Centers for Disease Control and Prevention (CDC) estimating that each year, foodborne diseases sicken one in six Americans (48 million people) and kill 3,000.

Tom Egan, PMMI Vice President of Industry Services,  says the new FSMA regulations will focus on preventing adulteration and, if an outbreak occurs, using supply chain data to quickly locate the products affected and the ingredient sources. Detection systems of all types will help prevent possible adulteration and can rapidly supply the data needed for the supply chain investigations during a recall. “We know that inspectors will be looking for data to confirm preventive controls are working,” he says, adding that “detection systems can help provide the necessary data to confirm the safety of the food produced.”

Survey participants span the food and beverage industry, ranging from seed companies to processors of ready-to-eat meals. Their detection-system choices of metal or X-Ray are based on the wide variety of products and processes. Contaminants could include anything from metal shavings and bone chips to torn plastic, with any type capable of causing significant damage.

For instance, one frozen-vegetable producer handles corn, peas, and other vegetables grown on 39,000 acres of farmland. He says it’s not uncommon for mechanical harvesters to pick up glass bottles that have been tossed into the fields. Metal detection systems simply won’t identify glass and other non-metallic contaminants, so his company relies on optical systems to sort product and X-Ray systems to detect contaminants.

The survey shows that 77 percent of the manufacturers use metal detection systems, while 43 percent use X-Ray systems. A surprising 39 percent of respondents say they use a combination of both systems in their operations. Nearly half of the survey participants say a combination of systems would work best.

A compliance director at a major meat processor who took part in the survey says his company uses a combination of metal and X-Ray systems to identify and remove contaminants. With more than 40 facilities worldwide, this company must choose the detection system to match each plant’s needs.

Indeed, the survey shows that two of the top three concerns when purchasing a system are determining its accuracy in discerning different types of contaminants and being able to accurately locate small particles. Metal detection systems are limited to metal contaminants only. These can be caused by metal-to-metal wear that is common in any manufacturing facility. However, he says, even these systems may miss metal fragments, depending on the size and orientation in the food product. He says their tests have shown that X-Ray scanners often do a better job detecting metal than the metal detectors do. However, when choosing a system, he points to the fact that X-Ray systems can cost up to five times as much as a metal detection system. 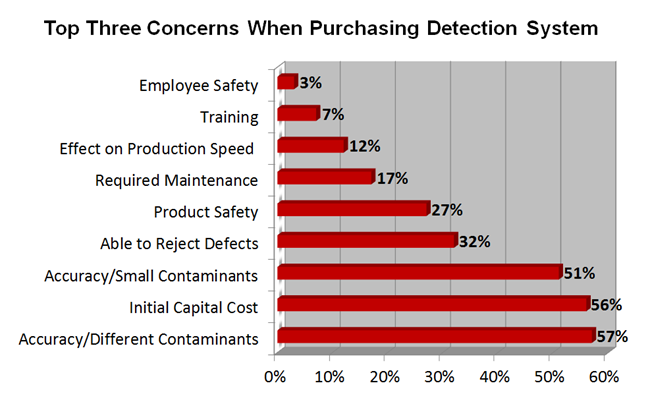 Closely following accuracy as a top concern is the initial capital cost. Less than 5 percent of respondents say they do not think detection systems are needed, while 41 percent say they are willing to invest in advanced systems with the highest accuracy.

Still, as one survey taker says, “The issue I have is that the cheapest solutions are still way too expensive. Only the highest volume of production can justify this cost. It's simply not a viable solution at these prices.”

Many plants have numerous production lines. As one respondent indicates, high capital costs can cause companies to forego installation, or go with only lower-cost metal detection, depending on the types of contamination risks they see in their operations.

Many food manufacturers look for opportunities to feed multiple types of finished product through a single scanner rather placing one in each line.

This has led to more advanced systems with expanded capabilities — and costs. Inspection and detection systems have had to adapt to changing consumer desires. Egan explains that as buying habits have shifted to match an increasingly on-the-go lifestyle, brands have creatively responded with a variety of packaging formats and materials varying in size and shape. Often these products, using a pre-packed salad or individually packaged meals as examples, can have varying consistencies from package to package.

“Today's X-Ray and metal-detection equipment now utilize multiple energy spectrums and detectors in one unit, filtering and sorting materials by chemical composition while outlining their various consistencies clearly,” he says. X-Ray systems are also being installed inline, whereas initially, the systems were placed at the end of a project as a last line of defense.

“Final inspection doesn't take advantage of the new rapid and comprehensive functionality of the technology,” Egan says, adding that X-Ray inspection has moved more into the heart of the process, and the equipment now needs to be as durable and hygienic as traditional inline metal detectors.

While being able to accurately detect contaminants is the most important attribute of these systems, the users also want to make sure that affected product is safely removed. Systems can use a variety of techniques, such as paddle kick-outs or drop gates. As one survey responder says, “We wouldn’t detect if we can’t reject.”

Ultimately, though, choosing a detection system comes down to satisfying the consumer and the retailers. With FSMA changing the focus of food safety from reacting to contamination to preventing such incidents, Egan says, retailers want assurances that the products they are receiving have been thoroughly checked during the production process. “All parties want to avoid leading the 6 o’clock news because of some contamination issue.”

That point was echoes repeatedly in survey respondents’ comments. 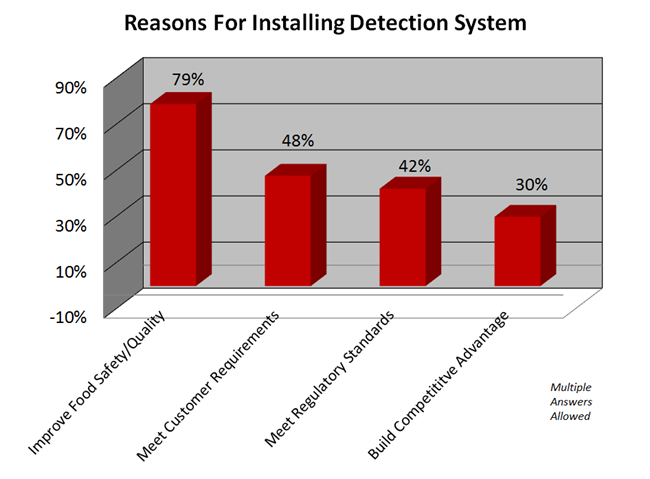 When discussing the justification for purchasing either type of system, one survey participant explains that “Quality does not cost. It pays.” He went on to says that detection systems help ensure conformity and consistency. When small defects can be detected, it reduces the liability and, in that respect, a quality product is cheaper than the alternative.

Meanwhile, another participant says safety is a competitive advantage in this industry and can be a significant differentiator. However, another respondent states her reason bluntly: “Food safety is of utmost importance. We would likely not survive a recall.”