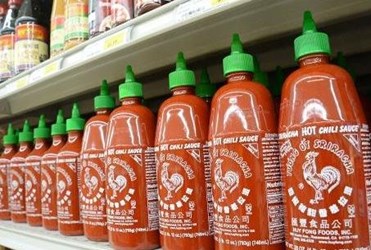 A Los Angeles County Superior Court judge delayed a ruling on the city of Irwindale, CA’s request to shut down the local Sriracha hot sauce factory on Friday, Nov 22. Nearby residents complained of a terrible odor emanating from the plant in late October, asking the plant to be temporarily shut down.

South Coast Air Quality Management District inspectors installed air sampling devices inside the factory and around the neighborhood after the Nov 1 ruling. Judge Robert O’Brien had been anticipating a report from inspectors, but when he asked attorney John Tate — representing Sriracha’s parent company, Huy Fong foods — for the report, Tate came up empty. He says he never received a report, and does not anticipate receiving one, as air quality inspectors found the plant had no violations. “There's no evidence that we're causing a smell,” Tate said Friday. “Maybe there's a smell coming from somewhere else, but there's no evidence it's coming from our plant.” A ruling is expected from O’Brien regarding a temporary or permanent shutdown in the coming weeks, but he did not give a date.

As of this writing, there have been 37 complaints — ranging from swollen eyes, to heartburn — about smells around the Irwindale, CA Sriracha plant. Inspectors have verified smells on three occasions on three separate days, but have not been able to link the odor to the Srirarcha plant. The central point of the case is whether or not the odor the plant emanates is harmful. However, this question will be very difficult to answer at this juncture, as workers at Sriracha have already grinded this year’s chili harvest, creating next year’s namesake hot sauce.

Data gathered by the inspectors’ monitoring devices at the plant and surrounding neighborhood have turned up limited results. Samples show rubber particles from passing vehicles in the neighborhood, as well as some burnt organic matter. Samples from within the factory have detected ethyl acetate, a common compound found in beer and food production, but the concentrations found were well below harmful levels. It seems that this case is being drawn out to its maximum. Sriracha will face at least one more court date in the future determining the fate of it Irwindale, CA plant despite scientifically proving it has done nothing to violate the safety of its workers and members of its surrounding community.

UPDATE: Judge O'Brien has given his ruling much sooner than anticipated. A late decision on Tuesday, Nov 26 from O'Brien has ruled in favor of the residents of the city of Irwindale, CA. An injunction has been placed on the Sriracha plant, temporarily ceasing operations. The injunction does not completely shut down the facility, nor does it specify actions to be taken.

Want to publish your opinion?

Contact us to become part of our Editorial Community.