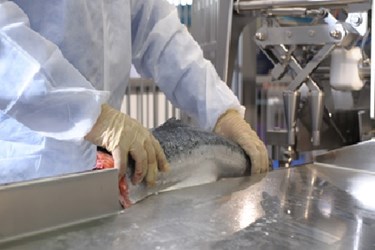 A Norwegian partnership has developed a robot that uses X-ray technology to locate bones in white fish and then fillet them with powerful, precise jets of water

A project orchestrated by Nordic Innovation, Sintef, Marel, Faroe Origin, and Norway Seafoods has developed a robot that will automate the process of deboning and filleting white fish while reducing waste and boosting efficiency.  Employing image analysis and recognition technology, the robot uses X-ray to locate fish bones and then fillets the fish with a powerful jet of water.  According the Sintef press release, through this process, “the fish is guaranteed to be boneless, with considerably less waste than with manual fileting.”

Machines used to automate the filleting process of farmed fish have been around for some time, but white fish caught in the wild, unlike farmed fish, such as salmon, can vary greatly in size and weight.  This means that developing a way to automate the removal of bones and filleting processes that is both quick and precise has been a difficult task.  Not only has this process been historically difficult to automate, the filleting of white fish is a time consuming and complicated job which can result in a three to seven percent loss of the most valuable parts of the fish.

“The new robot will speed up the processing of white fish while significantly reducing waste.  This could provide the suffering Norwegian fish industry with a much-needed boost,” says Marit Aursand, Research Director of Sintef Fisheries and Aquaculture.

Currently, fish caught from Norway’s Lofoten — an island chain with abundant sea life — may travel to two or three different countries to be filleted and packaged before returning back to Norway.  This new robot could, however, enable the processing to be completed in Norwegian facilities, allowing fresh fish to be sent directly to shops rather than abroad.

Aursand adds, “Fish processing in Norway will soon become a thing of the past if the filleting process is not automated and made efficient and profitable.”  The new invention could be just the thing to boost efficiency and allow for profitability, which means the industry can remain on Norwegian soil while quality and selection are improved.