More Corn Than We Know What To Do With… 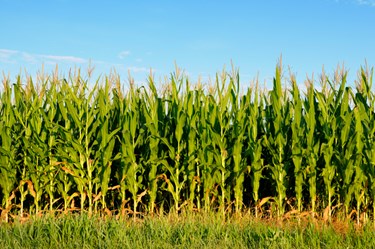 Beach balls and sunscreen have become distant memories, disappearing alongside the growing season, as autumn and the harvest are now in full-swing. Farmers across the country are filled with surprise, as they marvel at the abundance of corn their fields are yielding this harvest season.

Many regions of the U.S. were hit by an abundance of rainfall accompanied by cool temperatures this summer. It just so happens that these are the ideal conditions for corn pollination. States expecting record corn harvests due to these optimum conditions include AL, GA, IN, and OH. The USDA estimates that the nationwide corn harvest of 2013 will produce 13.8 billion bushels (one bushel equals 56 pounds), edging out the current record from 2009 of 13.1 billion bushels. Corn farmers are sure to welcome this news with open arms, as the summer of 2012 brought heat, a drought, and consequently, a very low bushel total. In fact, its 10.7 billion total bushels was the lowest since 2006, says Chad Hart, an agriculture economist with Iowa State University.

However, it’s not all good news for the corn farmers. Iowa, a state famously known for its corn production, has seen inconsistent results. Planting was delayed by spring rain, which was followed by a dry summer. Some farmers are producing 200 bushels per acre in Iowa, while others are yielding less than half that.

The price of corn this year has been significantly lower than last year. Due to the drought, 2012’s price per bushel was more than eight dollars. This year, farmers are seeing around four and a half dollars per bushel. The price continues to drop as the likelihood of a corn surplus increases. According to Hart, because of the price drop, livestock farmers will be able to sufficiently maintain their animals. Beef, chicken, pork, and turkey producers rely on corn to feed their animals, allowing meat prices to remain stable. The abundance of corn will also help the ethanol industry, which uses corn to create gasoline additives, ultimately reducing the consumption of fossil fuels. Corn will also be shipped to Japan, Mexico, and China, who all have recently increased their demand for the export.

Despite the increased demand, this year’s harvest will provide more than enough for everyone asking for corn. “We will have more in storage as we go into next summer,” Hart says. Farmers can be happy about producing an abundance of fruit from their labors, but looking at the corn industry through economic eyes, maybe they should question, “Is it worth it?” After all, it seems that the more corn you produce, the less you get paid.