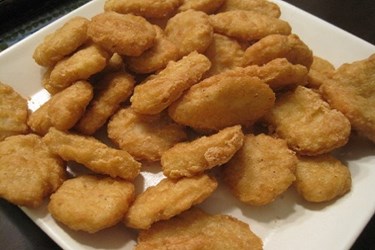 Firing back at critics, McDonald’s releases YouTube clips showing what exactly goes into making a McNugget

McDonald’s of Canada says the “pink slime” or “pink goop” of mechanically separated chicken is not what the company’s McNuggets are made of. To prove it, the company has released new videos showing the entire method of making a McNugget from inside the Cargill processing plant.

“Pink slime” is the more-commonly-used term for “ammonia-treated lean beef trimmings.” The process involves removing edible pieces of meat stuck to the bone of an animal through mechanical means which then are turned into a substance that thickens beef and enhances chicken products at a reduced cost. According to McDonald’s, after 2011 the company stopped using lean beef trimmings and is now using only white boneless meat to create McNuggets.

McDonald’s gave viewers an example of “extreme transparency” — a new trend where companies, especially those who have been ridiculed, go to great lengths to show customers how the company works. The McDonald’s clip shows Amanda Straw, a deboning specialist at Cargill Limited in London, Ontario, Canada, cutting meat off a chicken. Straw removes the bones from the meat and places them into two separate piles. Straw explains that breast meat is used to make McNuggets, but wings and drumsticks are not included in the recipe. “This is what we do use, and this is what we don't,” explains Straw, pointing to the two piles. “You've got your white meat, breast, and tenders, used for things like nuggets or grilled. Then you've got dark meat and thighs, and a little bit of skin is used in some of our products.”

Another video from the company features Nicoletta Stefou, supply chain manager for McDonald’s Canada. Stefou takes viewers on a tour of the Cargill plant, showing the process to make the company’s McNuggets from preparation to shipping. The video was made to address the question, “What are legitimately in McNuggets? Is there pink goop?” Stefou wastes no time addressing the question, showing viewers a picture of the “pink goop” and saying “It's an image that's often associated with McDonald's and it's a question that gets asked a lot.” Stefou continues, “We don't know what it is or where it came from, but it has nothing to do with our chicken McNuggets. But I want you to see for yourself.”

From there she guides viewers through the entire McNugget creation process. In great detail, Stefou shows viewers how breasts are removed from chickens, are grinded, seasoned, formed into the signature McNugget shapes, and packaged for shipping. During the grinding process, Stefou compares the ground chicken breast to the previously shown photo of the “pink slime.” “Here's the pink goo image, and here's what actually we have, so it's very different,” says Stefou. “All we've got here is chicken breast that's been ground up, as well as seasoning, and natural proportion of skin for flavor, and as a binder.”

Last fall, a study from the American Journal of Medicine found that some chicken nuggets sold by quick-service restaurants (QSR) contained much more than just meat, so it’s easy to see why McDonald’s wanted to clear the air regarding how one of its signature products is made. While the videos may provide some relief to those who may have associated the “pink slime” image with McDonald’s, it probably isn’t the most appetizing thing for them either. Also, for those wondering, the process for making Canadian McNuggets is the same for the U.S. market, according to McDonald’s USA public relations manager Christina Taylor.