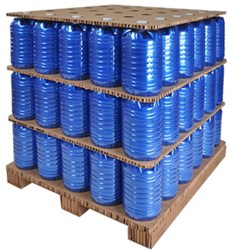 A common problem when transporting liquid containers is spillage. Containers holding liquid must be held in place to guard against shifting, but must also be sturdy enough for pallets to be stacked on top of each other without messy, and costly, waste due to spills. Hexacomb has recently developed a solution for this problem using structured paperboard with honeycomb- like holes that hold liquid bottles in place during transportation while allowing three pallets to be stacked on each other.

Hexacomb has two large manufacturing plants in Mexico, and with warehouse retail stores (Sam’s Club, Costco) booming in the country, this puts an added incentive in developing a sustainable, cost-efficient package design for long-range transportation.

The new product, called Hexstack, is a die-cut paperboard sheet made of Hexacomb material. Hexstack uses special die-cut slots to keep bottles and jugs in place during transportation. This then creates a smooth service to place another pallet load on top, which when shrink-wrapped, creates a very sturdy structure.  Ultimately, Hexstack solves two major problems in liquid transportation: pallet stacking and significant reductions in waste from spills and breaks.

According to Hexacomb, Hexstack is strong enough to drive over with a car, but soft enough to easily collapse for disposal.  The product is also durable, able to be used multiple times before the product loses its integrity. Hexstack also brings the added benefit of decreasing materials needed for transport by 75 percent compared to the corrugated alternative. The corrugated method is less practical because of the significant weight it adds to the load, and still doesn’t completely address the spilling and breaking problems associated with liquid transport.

There is also the issue of cost savings from use of Hexacomb’s new product. The corrugated method of shipping costs as much as 31 cents per container and still leaves liquid products subject to costly breaks and spills. Hexstack sheets cost about 8 cents per bottle, but eliminate the risks of damaged containers, spills, and produce less waste for retailers upon arrival.