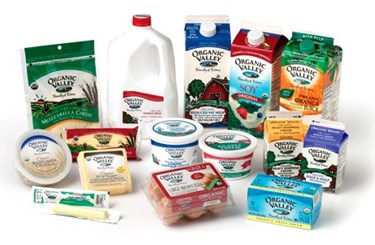 The nearly 1,800 farmers who belong to the Organic Valley co-op are on a mission. These farmers produce and market dairy, vegetable, fruit, and meat products across the country, and they say their philosophy and decisions are based on the health and welfare of people, animals, and the earth. Their customers apparently appreciate that approach since the co-op has grown substantially since its launch in 1988.

“All we do is organic,” says Lewis Goldstein, VP of brand marketing. “Those farmers are who we are. You come to Organic Valley because you want your working life to support what you believe as a human being.”

Organic Valley differentiates itself from conventional producers in many ways. One way is by explaining to their customers where the products originate. The group also follows stringent USDA standards that define organic products. For instance, Goldstein says those standards require that 30 percent of the forage for dairy cattle be grass, while Organic Valley farmers rely on grasses for about 65 percent of their feed. The group even places real farmers’ photos and signatures on the packaging.

The independent family farmer has become an endangered species, with nearly 600,000 farms being purchased by large corporations since 1960. The co-op, which is owned by the independent farmers, allows them to compete against larger corporations. These attributes are important to some consumers, Goldstein maintains, and that’s a major reason more people are buying organic products.

Buying Organics Is A Progression

Most consumers start to buy organic products when they have children, he explains. When they have kids, mothers start to question what they are putting in their kids’ bodies. They usually begin with dairy, vegetables, or fruits — foods that are not in a box or can. Later, they move to organic eggs, cereal, chips, and other center-store items. “They want products that haven’t been treated with pesticides or other chemicals. They realize that what’s sprayed on the plants and what the animal eats comes through in what you’re eating.”

He points to studies showing that pesticides and chemicals used to treat cattle and crops have been linked to different health issues. Animals don’t need antibiotics and growth hormones that are not natural, he says, adding that organically-fed cows tend to live much longer than those fed conventionally.

“All these methods in conventional farming are meant to produce the cheapest and highest yield. We don’t question that. For some reason, in our culture, we think our food should be cheap. But if you put two and two together, cheap food isn’t always the best,” Goldstein says. “There is a strong feeling in our guts and in science that the less food is adulterated, the better it is for us.”

Increasingly, consumers are relying on clean labels to help them make their food-purchase decisions. A clean label may mean different things in different food categories. Perhaps it’s something different to the organic industry than it is to conventional packaged goods. Many companies use words like “natural” or apply multiple certification logos on their packaging. This can confuse consumers into thinking a product has healthier properties than it really possesses.

The fundamental qualities of a clean brand are transparency, clear explanations of ingredients, minimal processing, and no misleading statements, according to Goldstein. Organic milk processing is different than conventional processing, with limits on what can be added and which agents can be used in sanitizing the equipment. Organic Valley keeps processing to a minimum, keeping product as close to raw milk as they can while providing consumer protections. For instance, milk from cows that are 100 percent grass-fed is pasteurized but not homogenized.

Demand for organic products is growing beyond traditional “natural” retailers to other outlets that require warm distribution. Recently, Organic Valley has added two dairy-based energy drinks to its lineup: Organic Fuel, a protein recovery drink for athletes, and Organic Balance, which is targeted toward women as a breakfast or healthy snack. These drinks are sold in 11-oz., resealable, aseptic bottles. While the aseptic bottles allow these drinks to be shipped warm, they generally are sold and consumed as refrigerated products.

Goldstein says packaging is a core element for smaller brands that don’t do a lot of advertising. For Organic Valley, packaging plays a key role in communicating the brand image to people who don’t know the co-op. The group wants its packaging to stand out, yet still be recyclable and minimally damaging to environment.

“Our ingredients and graphics need to tell the same story. Every part of the product, the package, and supply chain need to be consistent in what they say about the brand. The organic consumer has a very holistic expectation of their food suppliers,” Goldstein says.

However, he also emphasizes that the group needs to innovate in its packaging, since the main product is in the same package used for the last five decades. The lifestyles and demographics of U.S. consumers are changing, and milk consumption is stagnating. That’s one reason Organic Valley is developing smaller, ready-to-drink containers; people just don’t want to buy half or full gallons once the children have grown.

Goldstein says a vocal minority of consumers has begun demanding reformulation of some products to minimize additives and processing. This can be challenging for food companies since it is not always easy to find substitutes for processing, stability, or even the taste that people expect. For instance, at consumer insistence, Organic Valley has removed carrageenan, an agent that helps cream keep its body when whipped. It’s a trade-off since consumers may wonder why a reformulated product doesn’t last as long as a conventional product or it may not look as perfect as it did before.