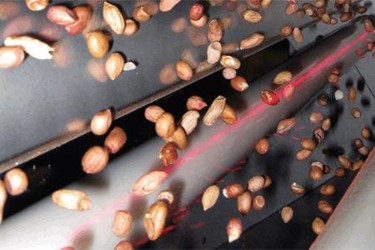 According to the World Health Organization (WHO), an estimated 600 million people – almost 10 per cent of the global population – fall ill after eating contaminated food. With safety regulations and global demand for food on the rise, optical and sensor-based sorting has become a necessity rather than a luxury for many producers who have previously relied upon manual sorting and inspection.

As a leading sorting systems manufacturer we see cross-contamination as an increasingly vital aspect of food safety. The reputational and financial impact of a product recall can be devastating for a company but sorting technology can be used to effectively manage crosscontamination issues.

Cross-contamination, or the presence of unexpected food matter in a supposedly homogenous food type, is a serious issue that can have significant implications for the global food industry. Headlines in 2013 reported the scale of the cross-contamination of meat products in the European horsemeat scandal, which wiped hundreds of millions of euros off the market value of well-established global supermarket brands. The impact of such errors can affect a wide range of foodstuffs meaning now, more than ever, the industry must ensure contaminants are identified and expelled from their products as early in the process as possible.