A New Recycling Model Is Upping The Sustainability Ante 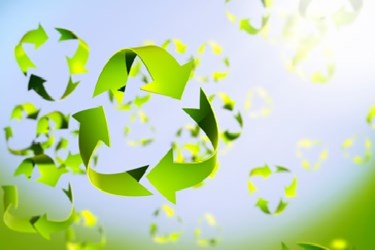 Recycling Reinvented, a non-profit group researching new recycling models, has recently released a study that shows recycling in the private sector can be done in a sustainable, profitable way. The Extended Producer Responsibility (EPR) recycling model for valuable packaging materials and printed paper shows that the industry can finance recycling programs with limited environmental impacts, while creating jobs.

The full study outlines a plan administered at the state level by industry producers. It even goes as far as to analyze the potential expenses and profits of the EPR model, as well as the fees that may go along with implementing the plan. Recycling Reinvented’s website also points out only 34 percent of municipal solid waste —glass, plastic, aluminum, steel, and paper — is recycled. According the company’s research, increasing that rate to 75 percent would create 1.5 million jobs by year 2030.

The costs associated with traditional methods of recycling are one of the biggest barriers to overcome when attempting to increase the percentage of solid waste that gets recycled. Previous studies show that the energy needed to recycle at a higher rate in the current system would not yield an adequate return.  However, in Minnesota, where the research was conducted, fees on producers would be fractions of a penny per unit when done on a collaborated, state level.  Further, in the case of materials that have high post-consumed value, producers would even receive credit back for their recycling efforts.

Over 25 recycling experts reviewed the model during a three-stage development process. Comment was open to companies such as Nestle in order to create an extremely transparent study, completed with as much collaboration as possible. The EPR recycling model can also be implemented in other systems, potentially saving more materials at a lower cost to producers than ever before. Saving our resources while using less energy is the definition of sustainability, and this study is a step in the right direction for companies looking to achieve that goal.