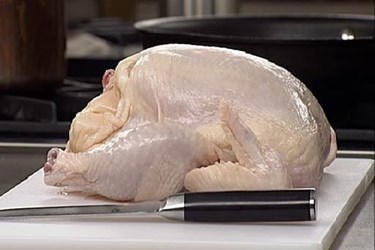 Researchers at Georgia Tech Research Institute (GTRI) have recently developed a prototype system that can automatically debone chicken and other poultry products. The system makes use of advanced imaging technology in conjunction with a robotic cutting arm to achieve precise and efficient cuts. By using a 3-D vision system, the robot is told where to slice a particular bird to optimize yield and reduce risk of bone fragments in the finished product.

Detecting Bone In Food With X-Ray Inspection Equipment: What You Should Know

Using the deboning system, a bird is first positioned in front of the vision system. The vision system functions by taking 3-D measurements of various location points on the outside of the bird. These points are then used as inputs in an algorithm to estimate the positions of bones and ligaments and define the most efficient cut. Using a two-degree-of-freedom cutting robot, in conjunction with a six-degree-of-freedom robot arm, the bird can be aligned to any necessary position. The bird is placed under the vision system and is then moved by the robot arm with respect to the cutting robot.

By employing a force-feedback algorithm, the robot can detect the transition from meat to bone, allowing the knife to move along the surface of the bone while maintaining constant pressure. Sustained contact with the bone also allows the knife to cut all the ligaments around the shoulder joint without cutting into the bone itself.

Since each bird has a unique shape and size, developing a sensory system that can make the adjustments necessary for the right cut will play an important role in the future of poultry processing. By helping the poultry industry maximize its return on each and every flock, processors can achieve boosted operational efficiency and increased cost-savings — benefits that are passed down to consumers. Furthermore, the automated deboning technology helps promote food safety by minimizing the presence of bone chips in chicken fillets and reducing the number of workers handling knives. While some fine tuning is still necessary to perfect the current prototype, the potential benefits will surely make such technology ubiquitous in the industry.