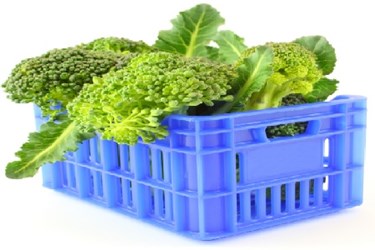 Two new studies have shined a light on a possible source of food contamination that has been largely overlooked.

As a means to reduce the burden on the landfills of our world, the plastic container industry has made a killing in marketing Reusable Plastic Containers (RPCs) for shipping and storage. Touted as a more planet-friendly alternative to corrugated cardboard boxes, reusable plastic containers are utilized along every step of the fresh food supply chain — from farms to tables around the world.

Two recent studies have proven that environmentally-friendly does not necessarily mean it is safe. To be clear, both studies — one in Canada and one here in the U.S. — were sponsored by corrugated carton groups, and corrugated cartons were not tested from the facilities involved.

The Canadian study, commissioned by the Canadian Corrugated and Containerboard Association, was first performed by the University of Guelph, Ontario, Canada in 2013. A 2014 extension of the university’s 2013 study, which tested 50 containers, tested 160 RPCs in order to increase the sample size and verify findings. Five different Canadian growers were the source for the “new and clean” RPCs that had been delivered on pallets wrapped in plastic film. The results of the 2013 study made headlines, while this newest study gives credence to the previous one. No RPCs showed positive results for salmonella, but 13 percent yielded positive E. coli tests. A whopping 73 percent met or exceeded the acceptable standards for bacterial loads, 51 percent tested positive for enterobacteriacae and 35 percent failed tests for coliform. Keith Warriner, Professor of Food Safety at Guelph, says his study confirms that a high number of RPCs have poor sanitary ratings. Though not necessarily the source for E. coli, listeria, or other pathogens most commonly associated with foodborne illnesses — inadequate sanitation practices and poor post-cleaning handling create an opportunity for that to occur.

The U.S. study was performed by the University of California-Davis. International Paper sponsored the study, while Corrugated Delivers sponsored the efforts to publicize the results. Some might say that is self-serving, but when the findings support the facts, why not use it? One major difference between the two studies was that UC-Davis tested RPCs with visible organic matter and/or residual produce, along with the visually clean RPCs. Trevor V. Suslow, head of the Department of Plant Sciences, had a slightly different goal in mind as well. The goal of his study was to assess the means by which the RPCs are cleaned and sanitized, “without raising unreasonable or unnecessary fears regarding the potential for unintended adulteration on produce packed and shipped interstate.” The fact that excess water, product residue, stickers, and labeling were often present on “cleaned and sanitized” RPCs raised questions about what you can’t see, as well as what you can.

Suslow’s team performed microbiological surveys to test only for indicator bacteria. It did not include tests to identify any specific pathogen. However, its bacterial load test results were right in line with the Canadian results. Suslow’s summary says, “Although there is no direct evidence, at this time, for the transfer of microbiological hazards from RPC surfaces to their product or any direct role in documented foodborne illness, this confidence has been somewhat eroded by recent studies.”

Both studies are an indication of the work yet to be done and will no doubt raise more questions than the answers they provided.