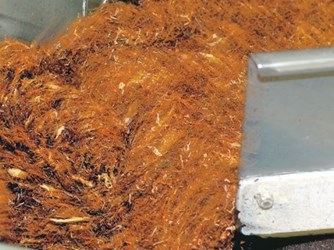 To maintain consistent quality of flavor in cigarette production, precise blending ratios are required. One way of influencing these ratios is by using optimal weighing systems. One European tobacco producer decided in favor of using appropriate belt scales.

Cigarette production in the factory is divided roughly into tobacco preparation (primary) and subsequent cigarette production (secondary). In tobacco preparation, the leaves are first separated from the stalks within the leaves, the ribs“. Depending on the type of cigarette and the recipe, the cut tobacco leaves are later mixed with ribs, although these are not necessarily from the same tobacco leaves. They are obtained separately. Depending on the type, cultivation area, and blend ratio, these ribs will later help to influence the flavor and nicotine content of the cigarettes.