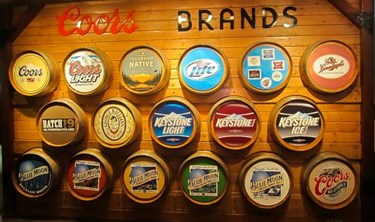 Almost six years ago, Miller Brewing Company and Coors Brewing joined forces to form MillerCoors. Each company brought different products to the table, but it wanted a commitment to sustainability to be a vital component of the new company’s identity. So the company rallied around the theme of “Great Beer Great Responsibility,” leading to the development of recyclable aluminum cans, current practices of water conservation, and making sustainability part of MillerCoors’ culture.

“Our employees are the driving force behind our sustainability efforts,” said CEO Tom Long. Highlighting the employee effort is the water stewardship steps the company took in 2012. As America’s second-largest brewer, making vast quantities of beer takes vast quantities of water. But MillerCoors has found a means of reducing water consumption through the use of short-interval controls during brewing and packaging processes. The company is using 3.82 barrels (one barrel is the equivalent of 31 gallons) of water to create one barrel of beer. Some of MillerCoors’ competitors are using more than 6.5 barrels of water to complete the brewing process.

Water conservation is also being observed all the way down to the farm level of MillerCoors’ supply chain. The company partnered with The Nature Conservancy in 2011 to build its Showcase Barley Farm in the Silver Creek Valley of Idaho. By innovating various water-saving techniques, the brewer has saved more than 270 million gallons of water over the last two years. The company looks to expand the knowledge it has gained to water-stressed areas like Colorado, Montana, and Wyoming.

Reducing waste to streams and achieving landfill-free status (eliminating the tons of waste once sent to landfills) is another focus of MillerCoors’ sustainability efforts. In June, MillerCoors’ Golden Brewery, the largest single-site brewery in the U.S., announced that it has achieved this status. This is a significant milestone for MillerCoors as now five of its eight breweries are at zero-waste status. The company is actively trying to have the remaining breweries hit that bar as well.

The company’s 2013 Sustainability Report: Brewing for Good features more of the areas and programs the company has concentrated on, including the roles of responsibility between the brewery, the consumer, and the community; the ethics and goals of MillerCoors as a whole; and the ways the company aims to benefit and improve its workforce and shareholders.