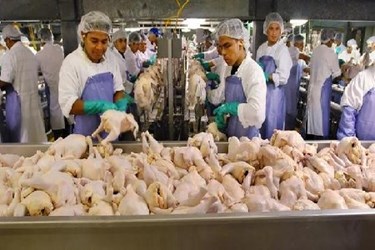 Significantly modified proposals for improving the contamination rate at U.S. meat processing plants falls far short of expected outcomes more than a decade after its inception

The National Joint Council of Food Inspection Locals, the U.S. Government Meat Inspector’s Union, was asked by FSIS to submit proposals for redesigning the carcass-by-carcass inspection system in 1997. The group recognized the need for reform in order to prevent increased salmonella contamination due to changes in mechanization at processing plants. Sewell helped write the proposal, which was adopted by FSIS, but then was radically modified before implementation. The modified version is installed in the pilot plants, which are still operating today. In the modified model, FSIS declassified disease conditions and restricted inspectors from stopping contaminated carcasses from proceeding to subsequent processing and packaging. In fact, plant sorters — who are not required to have specific training and who are under the supervision of plant production managers — replaced federal inspectors.

The plant production managers, supervisors of the sorters, are responsible for maximizing production rates and volume, thereby maximizing profits. In addition, the union sought to maintain a production line speed of 70 to 91 birds per minute in poultry plants, in an effort to keep the rate of Salmonella contamination down. FSIS eradicated this part of the proposal, allowing plants to operate at whatever speed management deemed necessary. As a result, these plants doubled their line speeds, but with the outcome of digestive tract contamination and visible fecal contamination. FSIS documented these cases in their Noncompliance Records, though the incidents continued with “no effective corrective actions and preventative measures” as required under law. This lack of oversight and failure by FSIS is what prompted Sewell to become a “whistleblower”. He reported his findings to the Government Accountability Project and to Public Citizen, an advocate for consumer safety and government integrity.

Further proof of the inadequate evaluation of the HIMP pilot plants was released to the public in Sept 2013. The very first line of this report states: “The U.S. Department of Agriculture (USDA) has not thoroughly evaluated the performance of each of the pilot projects over time even though the agency stated it would do so when it announced the pilot projects.” In the report, the USDA is found negligent in their inspections, their evaluations based upon snapshots of two different 2-year periods, rather than for the duration of the pilot program that has been in existence for more than a decade. Furthermore, the USDA did not even do an evaluation on the five young turkey plants in the pilot project, citing the small sample size. And, the USDA, as of the date of the report, had just started drafting the preliminary report on young hog pilot plants.

“The HACCP Based Models Project configuration has significant problems that must be addressed if consumer safety is to be safeguarded,” states Sewell. Additionally, he says of future articles, “I will also detail specific improvements to the federal inspection system that can be made to correct shortcomings in consumer safety.” We look forward to hearing more Mr. Sewell.