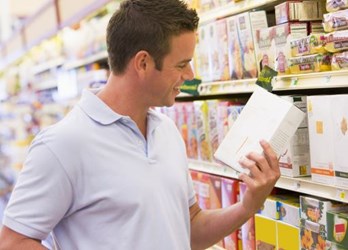 Food manufacturers are always looking for the possibility of new sales. As more men become active grocery shoppers and the primary preparers of meals, food makers are searching for new ways to win over the gender said to be from Mars.

The challenge for these companies is to find new ways to sell products that men have traditionally been not so eager to buy, like yogurt, egg whites, and hard cider. “A beer or soda in a long-necked, brown bottle makes a man feel like a man,” says Lu Ann Williams, head of research at Netherlands-based Innova Market Insights. Hard cider has been given the negative connotation of being a “girly drink,” stopping many guys from enjoying the hard cider products of companies like Woodchuck and Angry Orchard.

Sometimes food manufacturers approach marketing less-manly products simply by changing portion sizes. Other companies take on the problem with a completely new angle; adding size, new packaging, and renaming products. Take for instance Powerful Yogurt, a Greek yogurt which hit the market in March. The containers weigh in at eight ounces, a significant increase compared to the standard five to six ounce containers. With more food comes more nutrition. Powerful Yogurt features 20 to 25 ounces of protein per container, while most Greek Yogurts have 11 to 17 grams of protein per container.

The product’s label is also significantly different from the standard Greek Yogurt. The label is primarily black and features the contour of sculpted abdominal muscles accompanied by the slogan “Find Your Inner Abs,” along with the horns of a bull. Carlos Ramirez, CEO of Miami-based Powerful Yogurt, wanted to change the yogurt aisle. “It’s light blue, light pink, white, and everyone's talking to women and their digestive health,” he says. “The amount of protein is what guys are looking for.”

Bigger food manufacturers are also starting to see the potential for sales simply by marketing toward men. General Mills, for example, spent the summer of 2013 touring the U.S. introducing its Helper line of products that have been rebranded for men. Representatives for the company visited “guy friendly” venues in a red truck offering samples of its Crunchy Taco and Ultimate Three Cheese marinara. According to Elizabeth Laughlin, marketing manager at General Mills, the product’s ability to be conveniently and easily cooked, despite the a particular dish’s reputation of being difficult to cook, like Sweet & Sour Chicken, is where the appeal lies. The convenience aspect is especially true for on-the-go, single fathers.

Kraft has taken that idea even further with its Velveeta Shells and Cheese. Traditionally aimed towards busy moms, the food maker’s research uncovered a new market. “We found a segment of men already making and cooking Shells and Cheese that we frankly weren’t talking to,” says Tiphanie Maronta, senior brand manager for Velveeta meals. “They are not a chef. They are not a foodie. It's somebody who is starting to cook.” Generally speaking, this market is men in their 20s and 30s, married and unmarried, but likely don’t yet have children. Kraft has been reaching out to this segment since late summer 2012 with its “Eat Like That Guy You Know” or “Eat Liquid Gold” TV spots. These ads showcase slacker-type guys, for instance, the guy working at an aquarium store, eating the company’s Shells and Cheese, and living out their simple dream lives.

While men and women are clearly equals, the trend of men shopping for groceries and preparing meals continues to defy the 1950s convention of women primarily fulfilling this role. Food makers marketing toward men for the aspect of convenience may have hit their stride, as most guys simply want good nutrition combined with simplicity. Manufacturers that are looking to simply market the same products with new packaging might be wasting their time. Informed consumers know what they want, and know the hard facts about what they want. Manly frills, macho embellishments, and other gimmicks in packaging most likely won’t help sell products to guys who know what they want.