Could There Be Cancer In Your Cola? 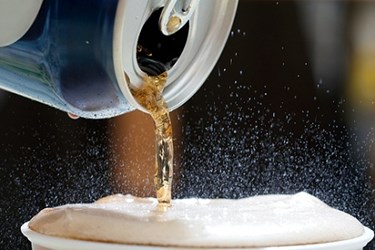 Last week, the FDA expressed concern about a chemical commonly found in dark soft drinks. The chemical, 4-methyliminazole (4-Mel), is an impurity produced when caramel coloring is added to cola to give the product its signature color. A study from the International Agency for Research on Cancer indicates 4-Mel is a possible human carcinogen.

A Consumer Report warning against exposure to high levels of 4-Mel, prompted the Consumers Union — a group dedicated to protecting consumer rights — to approach the FDA for a call to action. The union has called on the FDA to limit the allowed level of 4-Mel in food and beverage products, specifically soda, along with regulating the labeling of products containing the suspected carcinogen.

According to the report, multiple lab analyses were completed on 12 different soft drinks purchased in both California and New York over a nine month period. Two of these products, Pepsi One and Malta Goya, were reported to contain levels of 4-Mel high enough to necessitate a warning label. Currently, the state of California limits manufacturers to 29 micrograms of 4-Mel exposure for the average consumer per day under the proposition 65 law.

However, some argue that any exposure to 4-Mel may be too much. Dr. Urvashi Rangan, a toxicologist and the director of Consumer Safety and Sustainability Group for Consumer Reports, says “there is no need for consumers to be exposed to this avoidable and unnecessary risk.” According to the Consumer Reports study, Coca Cola products revealed a very low level of 4-Mel, providing proof that the inadvertent production of this chemical is avoidable.

Contrarily, FDA spokeswoman Juliann Putnam says the administration “has no reason to believe that 4-Mel, at levels expected in food from the use of caramel colors, poses a health risk to consumers.” However, Putnam also states “to ensure the use of caramel colors in food continues to be safe, the FDA is currently testing a variety of foods, including sodas.” These efforts will help the FDA decide if regulatory actions should be taken involving food and beverage products’ levels of 4-Mel.

PepsiCo has come forward, defending its products. The company says 4-Mel levels in its products have not breached the allowed limit, according to Proposition 65 law. The company defends this claim with government consumption data claiming the average consumption of diet cola by consumers is approximately one-third of a 12oz can. Assuming this guideline is true, consumers of diet soda are not exposed to high enough levels of 4-Mel to require a warning label under proposition 65. However, no word has been issued by the Goya company. The company’s Malta drink’s tests revealed it contains more than 29 micrograms of 4-Mel.