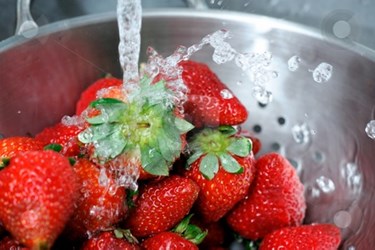 In autumn 2012, Norovirus was the culprit of Germany’s worst recorded foodborne illness outbreak. The complete investigation and resulting study were published by Eurosurveillance late last month

In late Sept and early Oct, 2012, it took just over two weeks for 11,000 people to be infected with the Norovirus in 390 institutions in five German states. The majority of the patients were children, as the bulk of the contaminated product was consumed at schools and childcare facilities.

In what seems like record breaking time, just eight days after its discovery, the source for the outbreak was identified and determined to be frozen strawberries imported from China. The first incidents, over 500 cases, were brought to light mid-day on Sept 27, 2012. By that evening, there were more than 4,000 cases reported. On Oct 5, 2012, the Chinese company responsible began recalling the product from consumers.  Largely due to the requirement for reporting outbreaks of acute infectious gastroenteritis to the public health department, the outbreak was traced quickly by epidemiologists to a single catering company. With regional kitchens serving mostly educational and daycare institutions, the source was identified quickly and an even larger outbreak averted. Approximately half of the 22 tons of infected frozen strawberries never made it to the consumer. Preparation of the strawberries also played a part in limiting the severity of the outbreak, albeit accidentally. Some of the dishes prepared with the frozen berries were heated during preparation, killing the pathogen.

The German Task Force on Food and Feed Safety took quick action. Published in their Activity Report on Oct 9, 2012, the agency began work on Saturday, Sept 29. The report notes all five German Federal States affected had received the necessary information for a coordinated approach to gather trace-back data and laboratory results. In quick order, 796 food and environmental samples were analyzed, with 15 regional kitchens identified as being linked to the outbreak. 13 of the 15 kitchens were owned by the same catering company, with 14 of the 15 having processed frozen strawberries from the same lot.

The study suggests the outbreak may be the result of contaminated water utilized in processing the strawberries. The authors of the study also note, “A better understanding of how the berries became contaminated is crucial for developing long-term prevention measures upstream from the retailer.” Though this may seem like an extreme case, Norovirus, as reported by the Centers for Disease Control and Prevention (CDC), is the most common cause of foodborne disease in the U.S. What is surprising, and scary, is that the virus survives freezing temperatures. It can be passed through contaminated food and water, but can also be passed from person to person.  It manifests quickly and is usually of short duration, but can be devastating.

A fortuitous chain of events enabled this large-scale contamination to be rapidly squashed. The first event was how quickly the involved health authorities notified the Robert Koch Institute (RKI). The RKI is Germany’s equivalent to the U.S.’s CDC; they set forth the parameters by which to conduct the investigation. Second, pupils were interviewed personally at their schools and an emailed a questionnaire used to ascertain exposure to the menu items. This data was used to compare cases with statistical analysis zeroing in on the strawberries as the source of the contamination. To read the report is to realize that a great many people worked as a well-oiled machine to bring this crisis to a quick conclusion. Finally, by Jan 1, 2013, the European Union (EU) passed regulation requiring that 5 percent of frozen strawberries imported from China be routinely tested for the Norovirus.

Unimaginable volumes of foodstuffs are distributed throughout the world, increasing the risk for the spread of disease through our food chain. Food safety is a global issue, not a local issue. Germany’s rapid dissolution to what could have been a much larger contamination may be something experts in food safety may want to study. Are the FDA, the CDC, and Food Safety Inspection Service (FSIS) able to identify and isolate sources of outbreaks this quickly? With food traceability and safety in the national spotlight, maybe now is the ideal time for a global conversation about food safety.